Some of the camouflage has been stripped from the front, revealing the headlights. But let's take a quick look at the interior first.

Not surprisingly, the rest of the cabin is a mix of elements from the Cee'd and the new Hyundai SUV. It's definitely a nicer place to be, although we can't form an impression about the seats yet (race buckets being used for testing).

The styling of the new Niro seems to be inspired by the Niro concept. This places the headlights up top, touching the sides of the hood. The Kia crowd clearly loves distinctive styling.

Although this prototype doesn't have them, high-spec Niros will come with ice cube LED daytime running lights. 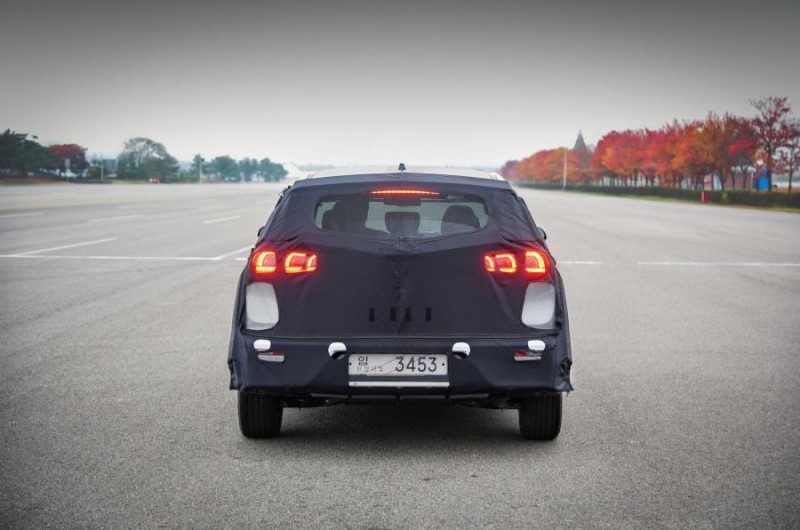 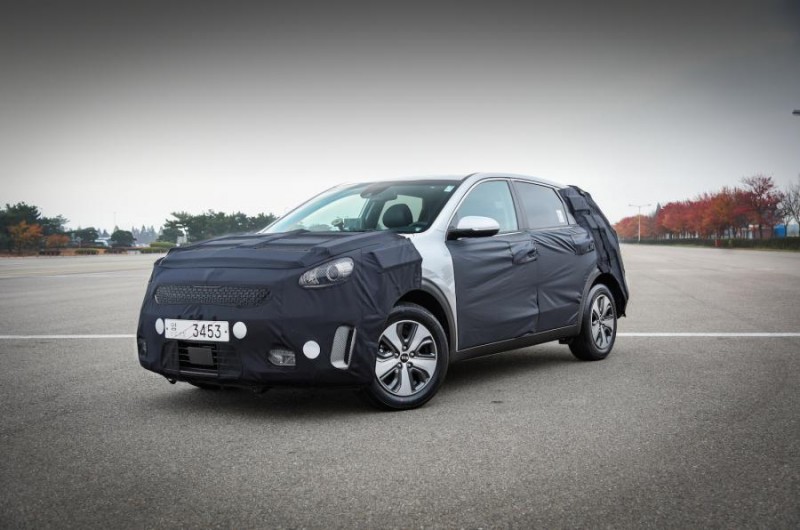 This is interesting from Auto Express:

The pictures help to give an idea of the proportions of the car, but don't really show you what it will be like. Auto Express was treated to a walk-around of an un-camouflaged car and it was clear to see it looks different from any other Kia on sale – it’s quite plain. Kia’s trademark ‘Tiger Nose’ is present but it’s thinner and wider on the Niro – it’s similar to the grille used on the recently facelifted Cee’d but has a thick black outer lip surrounding a chrome strip. Underneath there’s a secondary grille with horizontal LED day-running lights incorporated and to the outer edges of the bumper there are vertical vents. The headlights, however, are familiar and similar in design to the new Sportage.

It’s at the side where the plain styling is most obvious with only a thick bump strip covering the lower edge of the doors, and body cladding around the wheelarches being the stylistic highlights. Our car’s 16-inch wheels looked a little lost in the arches but 18-inch alloys will also be available. Our pictures hide the gently arching roofline that’s topped off with a spoiler and frame the boxy rear-end; the light clusters with integrated LED brake lights are neat as is the rear-view camera that’s incorporated into the wiper.
Top

I really like the way it looks, I think they did a great job.
Top

I have to agree with you, they did do a great job. I'm happy with the way that the car has come out. I love this car, I'm honestly thinking it's one of the best that they've made.
Top
Post Reply
4 posts • Page 1 of 1