Having lesser dimensions than the firm’s Sportage, the Niro still strikes you as a quite typically proportioned, jacked-up family hatchback – except that it isn’t as high-rise as the crossover class norm. Standing just 1535mm tall, the car’s roofline is considerably closer in height to that of a Nissan Pulsar than a Qashqai, and to get into the car you need to drop down into the seat in a way that plenty of crossover buyers would prefer to avoid. 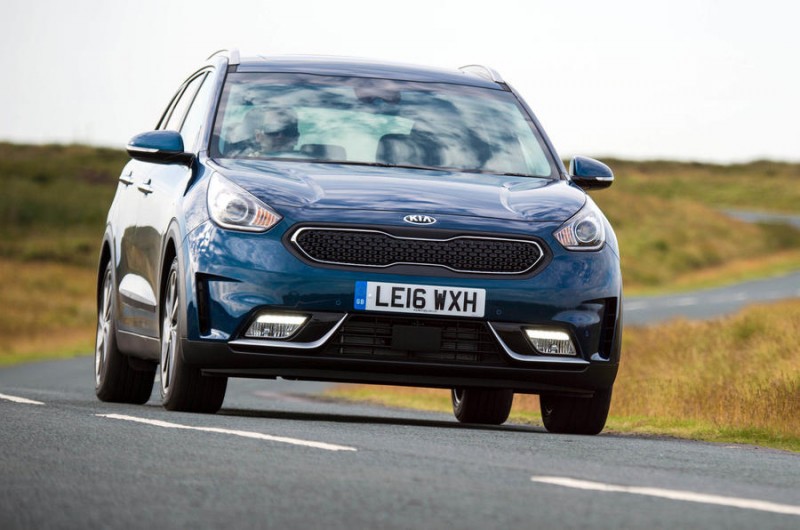 Once you’re onboard, though, space and comfort levels are both good. Kia’s standard leather seats are a little flat and hard, but there’s ample room for larger adults in both rows, with second-row head room particularly generous. Boot space is well up to class standards, too, and unrestricted by the car’s hybrid powertrain.

The Niro’s most convincing case will be at a much cheaper price point than this top-of-the-line version. Its £27k asking price makes its powertrain seem weak and one-dimensional compared with alternatives that are available for the same money – and its specification hobbles its performance in more ways than one.

However, at the sub-£23k price of a mid-spec 2 example, the Niro may well make financial sense at least. It has sub-100g/km diesel-powered opposition from the likes of the Nissan Qashqai and Renault Kadjar, but compared with the former the Niro is broadly competitive on price, five groups to the good on insurance rating, 4% (or between £160 and £320 a year) cheaper on company car tax, and it has a specification that includes touchscreen infotainment with navigation, a DAB radio, part-leather upholstery and plenty else that the equivalent popular Nissan does not. It isn’t a car for interested drivers, but the Niro has its place all the same.

Having read the Autocar review which is very negative I do not think I would want to buy the Robert de Niro. Another reviewer says he found no difference on the ride between 16" 0r 18" Wheels ,as always you must test drive yourself. No sign of the NEEROO at London main Dealer on launch day. I also find the ride on the CEE'd needs to be improved, despite mag reviews say ts OK. IMO the Flexsteer is a total nonsense, KIA need to improve steering feel & ride comfort on all their models. Too many models too many variations .
Top

I always say take a look yourself and what suits one person may not suit another, take reviews as a guide only.

That said some of the review is kind of disappointing but I see where they are coming from - £27k+ is a lot for this type of car.
Top
Post Reply
3 posts • Page 1 of 1